The Debate within the meeting

The debate is a self-contained section of the meeting, much like the "Hot Questions" section. The Meeting Leader will give the floor to the Debate Moderator, which will take the lead from there until the end of the debate, upon which the floor is returned to the Meeting Leader.

If the debate section is embedded in a classical meeting, it's up to the VPE of the club to decide where to place it, although we recommend it to be after the prepared speeches (since prepared speakers are usually nervous  and wanting to be finished as soon as possible), and before or in replacement of "Hot Questions" (If the debate is done before,  the Hot Questions section can use whatever has happened in the debate as a source of inspiration for questions).

The VPE decides the amount of time to allocate to the debate, which cannot be less than 40 minutes, as well as whether the debate will take place during a "traditional" meeting or it will be a debate-only meeting.

This would be a recommended meeting agenda entry:

The order of speaking of the teams is decided by the Meeting Leader before the meeting by a random draw, and given to the Debate Moderator.

A no-show by a team member on the day of the meeting will not be grounds for canceling the debate.

The Meeting Facilitator should make sure that Entry and Exit ballots are printed and available for the meeting, and that they are previously distributed to all attendees, or at least placed on the tables or chairs where they will be seated, together with pencils or pens.  Templates for Entry and Exit ballots will be available at the branding portal.

The Debate proceeds as follows (with suggested timings expressed)

This gives the following timings depending on the number of teams:

Upon receiving the floor from the Meeting Leader, the Debate Moderator introduces the debate topic and provides short background information of the subject, such as why this topic is relevant or what recent news have happened that make it interesting or worth debating. The Debate Moderator also enumerates the positions that will be defended, without commenting on any of them and without expressing a preference or endorsing any of them.

Teams are not introduced at this point.

As everything in Agora, we strive to achieve an objective measure of our success. The goal of a debate is – besides educational – convincing people of your viewpoint. As such, the best measure of success is whether this has actually happened. This is done by two polls: an entry and an exit poll.

The Entry Poll is an anonymous poll, conducted before the introduction of the teams and their members, with the goal being trying to get a snapshot of the true views of the audience while minimizing the influence that can exert knowing that a certain friend or fellow member is on a team defending this or that position. Of course, team composition cannot be kept secret, but that doesn't mean that we shouldn't try to minimize its impact.

After introducing the debate topic and positions, the Debate Moderator will ask attendees to fill in the Entry Poll and hand it back to him. Results are neither counted nor announced at this point. Participating in the Entry Poll is voluntary.

The Entry Poll and the collection of the ballots should not last more than 2 minutes.

Introduction of the Teams

After the Entry Poll has been conducted, the Debate Moderator introduces the teams, their members, and states which position each team is defending. It is recommended that each team is given either a number or a single-letter name.

Unless impracticable, team members should be seated or standing together, separate from members of the other teams and from the audience.  All teams should share an area away from the audience – either on stage or a special seating area of the room.

After the Debate Moderator has introduced the teams, he announces the speaking order drawn before.

Introduction of the Judges

During the Introductory Round (equivalent to the Affirmative or Government Round in traditional debate systems), a representative from each team explains the position of the team and the supporting argumentation. The representative speaks uninterruptedly for a maximum of 3 minutes, with a 30 second grace period.

Normal timing signals are used during this speech, and the Debate Moderator should stop any speaker that exceeds the 3:30 time mark.

Q&A Rounds are rounds during which both the Debate Judges and Audience members (in this order) can make questions to the teams. They can also make their own points as part of a question, but the Debate Moderator should not allow these to be turned into speeches.

Judges are the first to ask questions, with the audience next when the judges have no more questions.

Follow-up questions are also allowed, but again, the Debate Moderator should be wary of these turning into a ping-pong match or a dialogue.

For questions from audience members, the person wanting to ask one or more questions raises the card with the team name to which the question is addressed, and waits for the Debate Moderator to give him the floor. All questions must be relevant to the topic, stated unambiguously and addressed at a specific team.

Ideally, the use of cards with the team name will allow the Debate Moderator to conduct a balanced Q&A session, distributing the questions so that all teams get a similar number of questions.

After the person has finished speaking, the Debate Moderator can give the floor to the alluded team to answer or can declare the question inadmissible and state the reason.

The Q&A Round finishes either when the time allotted for it is up, or when there are no more questions

The Cross-Examination round is a similar round to the Q&A Round and in it, teams are given the chance to cross-examine other teams.

The order of questioning is the reverse of the order of speaking that was drawn for the Introductory Round (so that if the speaking order was Team 2, Team 3, Team 1 for example, the Cross-Examination round order will be Team 1, Team 3, Team 2).

The Debate Moderator will give the floor in turn to the different teams. As in the Q&A round, questions and answers should take no more than 1 minute.

The Rebuttal Round (equivalent to the Negative or Opposition round in other debate systems) is a second speaking round where teams can offer arguments against the positions of other teams, or offer additional arguments in support of their position.

The mechanics, timing, and order of speaking in this section is the same as in the Introductory Round.

In the Concluding Round, teams make their final statement.

During the concluding round, no new arguments or interruptions are allowed.

The order of speaking is the same as in the Introductory round. This is especially important to balance the primacy-recency effect.

After the debate has concluded, the Exit Poll is performed. The Exit Poll and the collection of the ballots should not last more than 2 minutes.

As in the previous case, the Exit Poll is an anonymous poll that tries to measure whether the arguments presented by the different teams made any effect on the ideas of the audience.

This could be a sample Exit Poll ballot (the design is subject to change): 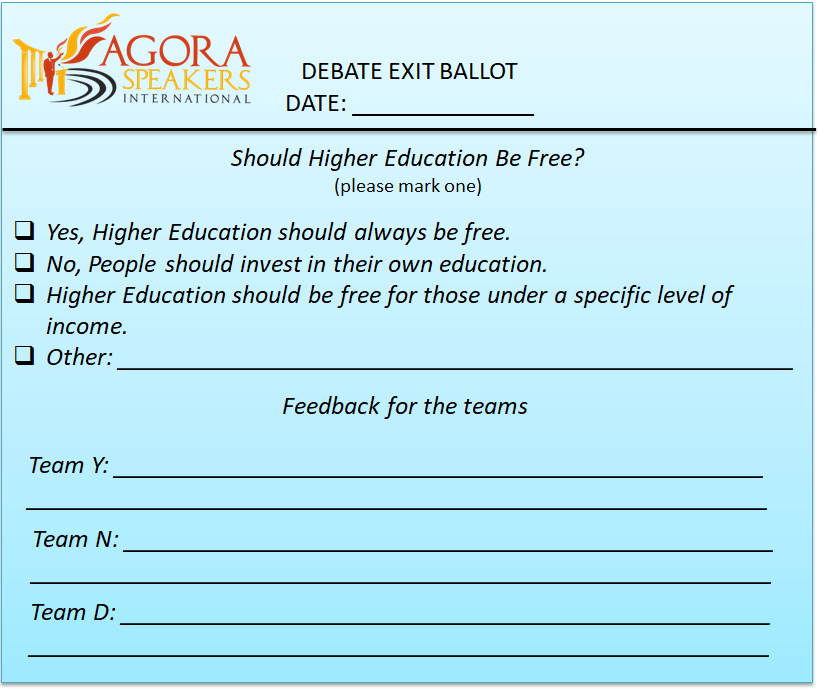 If there is enough time for counting and summarizing the results, results of both polls are announced at the end of the meeting. If not, they are posted on the Club webpage / WhatsApp group / Facebook group/blog, etc. If the club doesn't any of these, they are announced at the beginning of the next regular meeting.