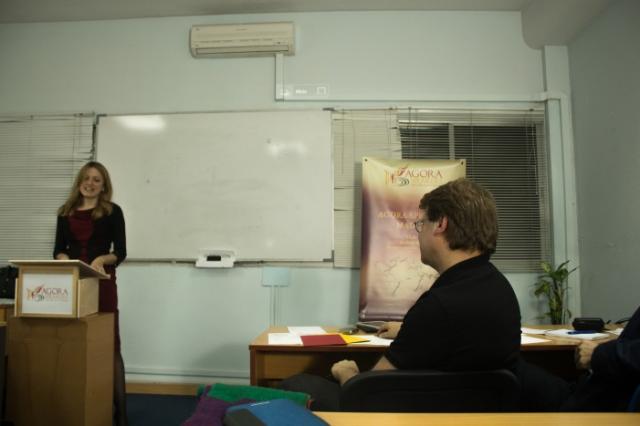 The Meeting Leader is the person in charge of preparing and leading the meeting, giving the floor to each person according to the planned agenda, greeting them on the stage, sending them off and in general ensuring that the meeting flows smoothly.

Here's how you should proceed when you're the meeting leader for a meeting.

Your work as a meeting leader starts well before the meeting itself, and you have three main tasks:

Filling in the agenda

If your club has a Vice President of Education (VPE), then he or she will provide the agenda of the next meeting to you. Otherwise (especially if the club is still very new and still hasn't elected the club officers), the agenda will be the basic one specified in the documentation for new clubs.

You should actively ask for volunteers for all the roles present there.  For example, he could message club members saying:

"Hi everyone, for the next meeting, we're still missing a Timer, a Meeting Evaluator, and a Hot Questions Master. Who wants to volunteer?"

If there are not enough volunteers, he could be even more proactive:

"Peter, will you be attending the next meeting? How about being the Timer?"

The Meeting leader should always seek the advice of the club's Vice President of Education when looking for people to fill in certain roles.

One of your tasks during the meeting will be introducing the members that will be performing the different roles.

In terms of introduction, you could mention the member's profession, or how long he has been with the club, or whether he's a club officer, etc.  A very good practice that is followed in many clubs is for the Meeting Leader to contact all participants several days before the meeting and ask all of them some question such as "what is your favorite movie?", "if you could have a superpower, which would it be?", etc., and then use the answer during the introduction.

Since the Meeting Leader is also the one who should handle any unexpected situations (such as a person with a role not showing up at the meeting), it's a good idea to arrive at least 10-15 minutes before the scheduled starting time of the meeting.

Usually, the Meeting Leader is introduced by the Meeting Facilitator, but clubs can decide otherwise (for example, they might decide that it is always the Club President the one opening the meetings, or some other officer, etc.). In any case, if you were introduced by someone else, don't forget to shake their hand, and start by thanking them by their name before moving on.

Some things you can say at the beginning:
•    Welcome everyone
•    Ask everyone to turn their mobile phones off or in silent mode
•    Explain the purpose of Agora Speakers International and of the club
•    Ask guests to introduce themselves (as explained in the "Taking care of guests" section).

"Thank you, Mr. (name of the person introducing you), and welcome everyone to our meeting. Before we start, I'd like to ask everyone to please turn off your mobile phones or put them in silent mode. Agora Speakers International is a worldwide nonprofit organization devoted to helping people reach their full potential as communicators and leaders. (you can add more details about Agora or your club). We're here to learn and help each other learn. Please respect the speakers and don't talk while they are speaking"

You can also add some short anecdotes, jokes, or anything that you might consider useful to break the ice or spice up the meeting. For example, instead of the previous formal request for everyone to turn their mobile phones off, you could use something like: "At the last Christmas Concert conducted by William Christie, during the aria of Handel's Messiah, a mobile phone went off. Immediately, Christie asked the musicians to stop, and then directly faced the audience member and yelled at him "You've just ruined one of the most beautiful passages of one of the most beautiful works ever written. OUT, NOW!"… Now, I won't go as far as Christie if this happens during this meeting, but for sure you won't be making any friends if your mobile phone rings during the meeting, so please turn them off NOW."

In any case, try not to use too much time for this introduction, a maximum of 2-3 minutes should be enough. After this general introduction, proceed to introduce the guests.

Some clubs have a very good tradition of introducing also the recently joined members to the club and hand them a pin a membership certificate or similar.

Some possible humorous formulas could be:

"Today I'd like to welcome our newest club members. First I'd like to introduce Peter, who after being a guest for six - SIX no less - meetings, FINALLY decided to join. Let's everyone give warm applause to Peter, while he comes to the stage"

"Unlike Peter, with Anna, it was love at first sight. The very moment she crossed the doors of the club she knew she would join, and so she did - immediately after her first meeting. Welcome to the stage, Ana, please a round of applause for her".

With time, each Meeting Leader develops his or her own "style" of leading meetings. Unless you are leading a formal event outside of Agora with a strictly set protocol about what to say and when to say it, there's no "correct" style, and you should find the one you're comfortable with. With practice, it will inevitably emerge by itself. Accept it and let it develop. And as with speeches, it's extremely important that you let your natural style be, instead of trying to copy the style of someone else.

After you have finished introducing the new members, you should introduce the guests, usually by asking them just to state their name, how they learned about the club and a couple of sentences about themselves. 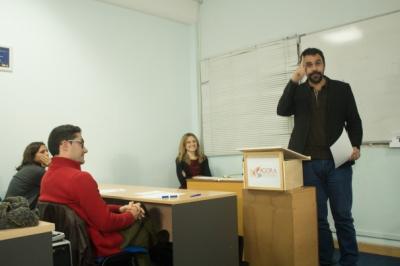 It's important to remember that, as a Meeting Leader, your role is to make others look great.  You shouldn't be the star of the meeting, but merely someone that helps others shine.

As such, when you give the floor to someone and after you shake hands with him, discreetly retreat to a location that gives the stage completely to the speaker. See how in the picture to the left, the Meeting Leader has completely moved away from the spotlight, and all the attention of the audience is focused on the person speaking.

Giving and taking the floor 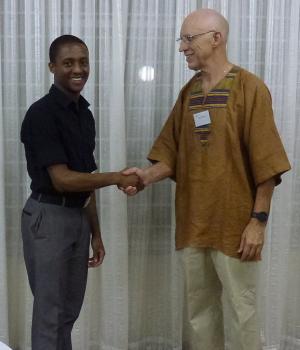 For each participating member, provide a short introduction, explain what is the member going to do, and then lead the applause by being the first to applaud. The applause should last until the speaker is on stage, at that point extend your hand, wait for the handshake, then retreat.

Applauses - especially at the end - are not only courtesy, but they are also a way to make the member feel comfortable and appreciated. They help defuse the tension and nervousness of the speaker. As such, they are a very important factor in creating a friendly environment.

Try not to read as you're introducing the next participant. This doesn't mean that you have to memorize the details of every single participant. Instead, when a participant is on stage, read and memorize just what you want to say about the next one.

While the participant is on stage, do not intervene in any way. Not even if the participant "goes blank", as that usually only worsens the situation. Allow him to recover by his own means.

After the applause has died out, thank the participant and at this point, you can add some humorous or relaxing comment about what the audience just heard. Your humor should always be positive and never disparaging or judgmental.

For example, let's assume that we have the following agenda:

One way the Meeting Leader could present this would be:

"Timing is extremely important in public speaking, and in today's meeting, our timer will be Peter Johnson. The superpower he would like to have is flying like Superman because that would allow him to travel anywhere and visit many exotic and inaccessible places… without having to go through airport security …  Peter, please come on stage and tell us about your role "
(start the applause, Peter comes to the stage, you shake hands with him and retreat. Once Peter has finished explaining his role, you take over):

"Thank you, Peter. Make sure to finish your speeches on time because we all want to go home tonight and not exactly flying. Next, we have our Grammarian of the day, David Brin, he'll be connecting from Canada and the superpower he wanted to have is mind reading. So don't even think of making grammatical mistakes.  Let's give a warm welcome to David"
(start the applause, Peter comes to the stage, you shake hands with him and retreat. Once Peter has finished explaining his role, you take over):

and the process repeats…

As a Meeting Leader, it is your responsibility to ensure that the meeting proceeds smoothly and on time.

This means that if you notice something that is disturbing the meeting, you should act on it. Disturbances can include:
•    Mobile phones
•    People walking in and out
•    People becoming noisy
•    People taking pictures with flashes

These actions - and many more - should be addressed, but never while a speaker is speaking. (Speakers do not need or want to be baby-sat, and they also need themselves to learn to deal with these unexpected circumstances). Wait for the speaker to finish, and then from the stage ask politely - in general, never pointing at anyone in particular - for that behavior to stop, always explaining why. For example:

"I'd like to ask everyone not to take pictures with flashes as the flash can be very distracting and unpleasant due to its brightness to the speaker".

or
"I'd like to ask everyone not to walk in and out during the speech as it is very distracting for the audience. Please wait till the speech is over. ".