Quotations are an old, tried-and-true speech technique. Used correctly, they can spice up a speech by adding variety and dynamism, reinforce your message, boost your credibility and show your preparation.

A quotation is a concise and memorable phrasing of an idea, usually done by a well known and reputed person. Even extremely accomplished speakers use quotes constantly. One of the most liked and retweeted twits ever was US President Barack Obama quoting Nelson Mandela on Racism: 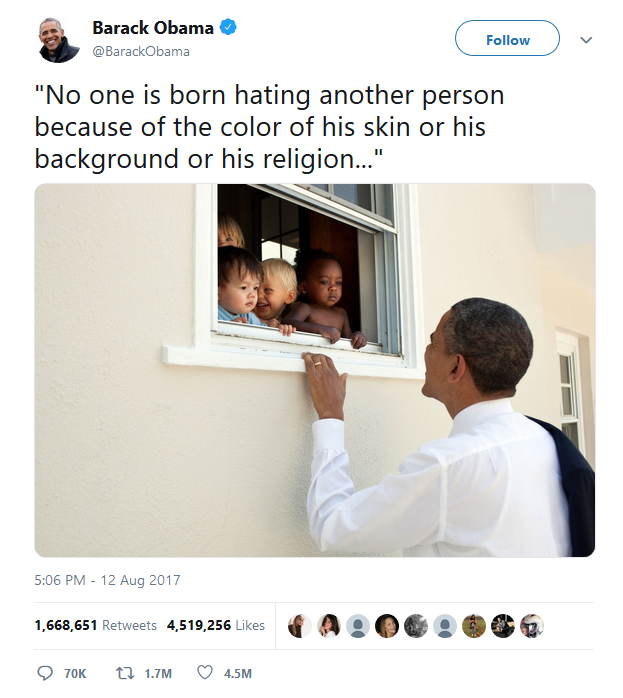 Where to use them

We are like butterflies who flutter for a day and think it is forever. (pause).This is how the great astronomer Carl Sagan described the pettiness of our desires and passions in comparison with the grandiosity of the Universe.
The future belongs to those who believe in the beauty of their dreams.

This is a great quote by Eleanor Roosevelt, but it doesn't carry a big "punch". It's abstract, and it's too impersonal for a speech ending. A bit better (but still not perfect) would be Malala Yousafzai's:

This quote is direct, is inclusive ("let us") and carries a more "action"-oriented message.

Where to find them

There are literally tons of resources on the Internet that allow you to search famous quotations based on a topic you're interested in. Some of these are:

There are also many books that offer curated and verified quotes. Some of the most venerable are:

When selecting a quotation, it's important to remember the context in which it will be used:

We need radical measures to fight crime. And yes, we will fight it. As Winston Churchill said, "we shall fight with growing confidence and growing strength in the air, we shall defend our island, whatever the cost may be."

How to use them

Practice. Make sure you practice and know the quote and its author by heart. However, do not memorize more than the bare minimum necessary, or you risk going blank during a speech. Especially do not try to memorize years or specific locations, as these rarely add value to the quote. For example:

As Robert Schuman - one of the founding politicians of the EU said, "World peace cannot be safeguarded without the making of creative efforts proportionate to the dangers which threaten it. "

As Robert Schuman, French foreign minister and one of the founding politicians of the EU said in 1950, "World peace cannot be safeguarded without the making of creative efforts proportionate to the dangers which threaten it. "

You say - they say - you say. When you use a quotation, it always has to be supported by your own commentary. Usually, the "sandwich" approach is also recommended here:

Never alter a quotation without clearly pointing it out. If you need to alter a quotation to make it suitable for your speech, make sure to say that clearly. A formula that usually works well is starting your version of the quote with "Paraphrasing (and you say the original author)....." or "As (original author) would have probably said if he lived today..".  You can come up with your own formula as well.. For example:

Aristotle would have probably said nowadays that man is by nature a social network animal.

Even when paraphrasing, try to avoid quotes that are cliches.

Quotations are supporting devices, not protagonists. Unless you are centering your whole speech around a certain person or event directly related to the quote, there's no need to provide more context information than strictly needed.

Quotations can also be used as learning material. Think what made the quote so memorable. Its rarely only due to the fame of the person that said it. After all, even famous people and very accomplished speakers say dull things that no one remembers. Try to come up with your own similar, witty and bite-sized idea summaries for your speech messages. Imagine others quoting your material. What would they quote and why? 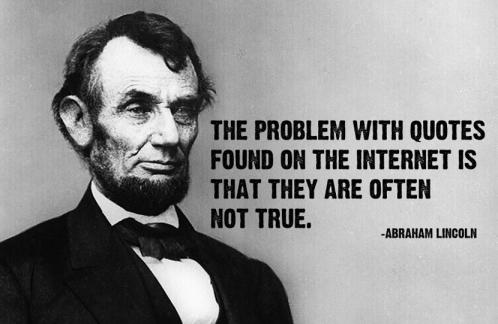 As a speaker, misquoting a person, or misattributing a quotation - especially during a debate or a high-stakes speech  - is one of the easiest ways to destroy your credibility. The more visible you are as a leader or as a speaker, the more scrutiny every single word of your speech will undergo.

Even if you're not a speaker, you should make it a habit of researching quotations that are used as supporting arguments in speeches, as some people will misuse them in order to convince you to trust their agendas. In fact, this is part of our Critical Thinking program.

Nowadays researching a quote is a much easier task than before.

Research the following quotes, verifying whether they are authentic and whether they have been correctly attributed.