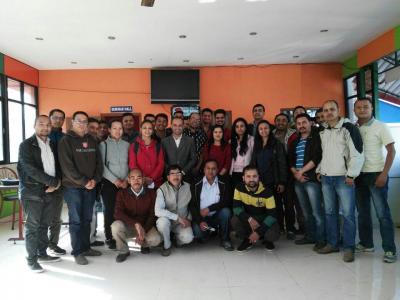 Carry out the meeting. Make sure to print enough agendas, and especially to include in each agenda:

Remember to take pictures, as you're making history,

and send us the pictures so that we can publish them (confirm with the people on those pictures that they're ok with them being published).

At the end of the meeting, it is recommended that you remind people of the next meeting's date, ask people right there, and then commit to taking roles for the next meeting.

After the first meeting, it's time to decide about the Club Officers or Club Management Team. The required officer roles are described later in this guide.

Usually, the person that starts a club acts also as its first president. Some people stay as presidents for a full year, others prefer to start the club, make sure it's healthy and step down, and do other things.  It all depends on the amount of time you have.

For the rest of the officers, usually at the beginning, you'll be doing all the roles, maybe for about a month or two. But it's recommended that you form a team of people you're comfortable with and delegate work as soon as possible to avoid burning out.

The first officers will probably be volunteers that you, as a club founder, appoint. Once the club is "stable" (meeting regularly with the same people coming back every meeting), you can ask for the next team during a special meeting of the club.

If more than two people want to do the same role, elections must be held.