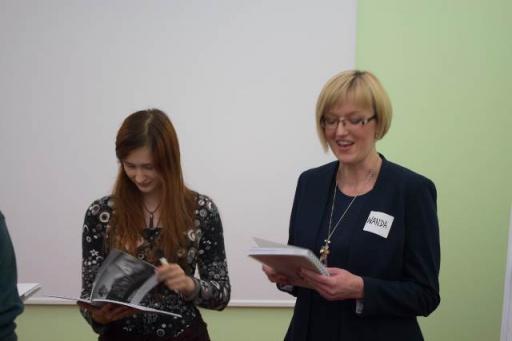 What are club officers?

Management and leadership are usually an invisible kind of oil that everyone takes for granted when things are running smoothly but that when absent, causes things to break apart.

Running a successful club requires a lot of time and dedication and carefully planned teamwork to ensure that meetings happen on time and regularly, that they have an educational purpose, that they are concise and not a waste of time, that members grow and develop, that the club benefits from the wider Agora community, etc. This is a lot of work that needs to be shared among a set of "officer roles" with different responsibilities.

Club officers are both leaders and managers. It's important to note that these are two very different concepts. Leadership requires vision - having a clear idea of where you want to take things, strategy, seeing the big picture, sharing your vision with the members, and inspiring and challenging them to accomplish it. On the other hand, management is being able to convert that vision into a specific plan of action and execute it within a timeframe.

Club Officers are in charge of running the club to ensure a smooth experience for everyone. All Officer roles are voluntary positions, and in fact, they are an excellent opportunity for practicing leadership of a small community.

Unlike businesses and corporations, in a nonprofit organization such as Agora Speakers, members can never be pressured into doing something. Everything is voluntary, and the most an officer can do is ask politely and explain. In fact, leading a nonprofit community is much more challenging than leading a business, as officers have to put into practice a lot more people-related and motivational skills than in any business.

There are a set of required officer roles in every club (usually for legal reasons) and some optional but recommended ones.

Note that we're talking about "roles" and not "people".  The same person can have more than one role (for example, in very small clubs, the Treasurer and Secretary could be the same person).

The opposite is also true: a role - except that of the President - may be shared among several people when the workload is high. For a very big club, there might be two Vice-presidents in charge of Education. In this case, it is recommended that there's a clear distribution of responsibilities for each person sharing a role.

In addition to the specified officer roles, a club can define additional officer roles such as "Event Organizer" (for special events or parties), "Blogger", etc.

Each club freely decides on its own whether they want 6-month or 12-month officer terms, and that may change from year to year. However, please note that all officer positions must have the same term duration. A club may not have a 1-year term for President and a 6-month term for VP of Education.

Why become an officer?

In many companies, progressing up to a managerial position requires lots of time (sometimes year) and dedication. Any mistakes that you make in that role may turn out to be fatal for your career.

You probably already know that Agora clubs provide a safe environment where to learn public speaking, with the freedom to experiment, make mistakes and learn from them in preparation for your professional usage of what you learned. Similarly, the officer roles in clubs provide an environment where you can learn leadership and managerial skills safely and where mistakes are not critical for your career.

There are many qualitative benefits of becoming a club officer:

At Deloitte, we have experienced the importance of volunteering and understand that it helps build skill sets that are critical to developing well-rounded leaders across our organization.
Doug Marshall
Director, Corporate Citizenship
Deloitte Services LP

A similar study performed by CareerBuilder found that 60% of the hiring managers considered candidates with volunteering experience much more marketable. A study by the CNCS quoted by Forbes showed that jobless people who volunteered had a 27% higher chance of landing a job.

The benefits of volunteering extend to many other areas - even into the realm of health. A study by the Ghent University in Belgium found that "volunteers have a health score which is statistically significantly higher than those who do not volunteer. This total association turned out to be substantial: it corresponded in size to, e.g., the health gains of a five years younger age."

Club Officers are Not Professionals

Members should always keep in mind that Club Officers are not expected to be professional leaders or managers. Just as all speech projects are learning projects, and no one should expect a TED-level talk in a club, in the same way, all officer positions are learning opportunities. Everyone should try to help and encourage officers rather than approach their roles with demands.

Club Officers are only expected to perform in a "best-effort" way (Meaning: they do what they can to the best of their time, knowledge, and ability).
They are under no obligation to meet anyone's individual expectations, much less obliged to provide any specific level of service.

Any regularly attending member with at least 6 months Agora club experience is elective for becoming a club officer (except in newly founded clubs, where this requirement is dropped). The Agora experience does not need to have happened in the club where the member wants to become an officer.

Only members able to serve at least 6 months are eligible to become club officers. Of course, all sorts of unexpected can happen even with the best intentions, but at least the visible horizon should be clear for the immediate future. For example, if a member has already scheduled to move to a different city in two months, it's pointless to serve that time as an officer.

A person who is a member of more than one Agora club may, if he or she has the time and commitment, hold up to two officer positions simultaneously - as long as they are in different clubs.

Holding three or more officer positions simultaneously is not allowed, as this will severely impact the quality of the services provided to the club.

Agora's Educational Year begins on Jan 1st and ends on Dec 31st. Depending on the club's decision on the duration of officer terms, the term and election dates are as follows:

This is a listing of all the standard Club Officers roles:

The Club Executive Committee only exists if all the mandatory roles have been filled and only if at least three people have officer roles. For example, a club that has just started and where the Founder is performing all of the roles is not considered to have an Executive Committee.  Similarly, if a club has existed for some time but at one point in time it only has a President, 2 VPs of Education, and 1 VP of Membership, it does not have the necessary set of officers to constitute an Executive Committee.

The above rule is to prevent autocratic abuse during the period of time where the club is still young, and all the officer roles are concentrated in one or two Club Founders.

The Club's executive committee must meet at least once every two months to discuss general club matters. Additionally, any club Officer may request a meeting of the Executive Committee to discuss a matter of interest. Such requests must be sent to the Secretary or the President of the club and should include a detailed explanation of the issue to be discussed. Upon receiving them, the Secretary must schedule the meeting on a date between 7 and 20 days from the day the request was made.

Whatever the reason for a meeting of the Committee, the Secretary must send to all officers the prospective agenda of the meeting, together with the exact meeting place, date and time, at least one full week in advance of the event. All club officers may add items to that agenda as necessary.