Agora empowers you to become a brilliant communicator and a confident leader who will actively build a better world.

We help people develop a core set of skills centered around Leadership: 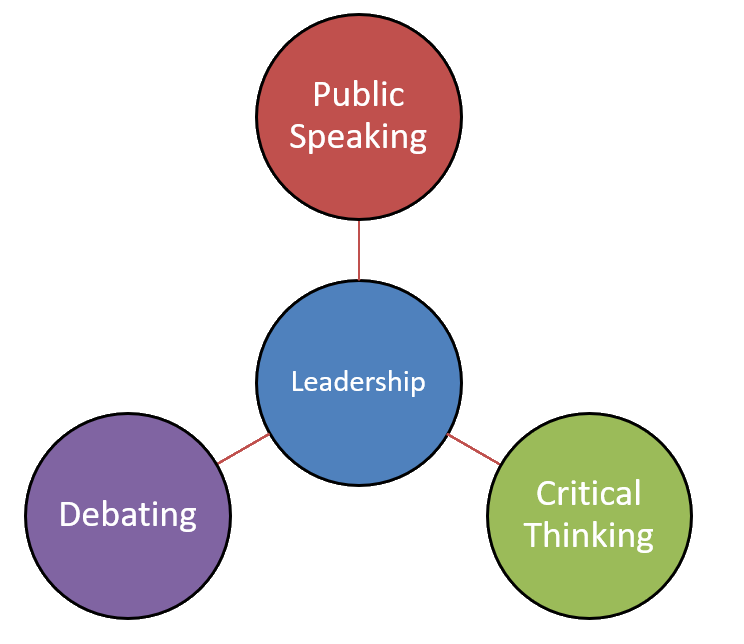 Here are some of the skills that you will learn and improve in Agora:

What's in it for me?

Joining Agora Speakers International will bring you many benefits on all levels, both in your personal and professional life.

Here are all the benefits that you get when joining our Foundation:

What if I don't speak in front of an audience?

It's a common misconception that public speaking techniques and training are useful only when speaking in front of an audience. In fact, nothing can be further away from the truth. As you progress through our program, you'll see that your communication style improves even in one-to-one interactions, not only in the professional but also in the personal sphere. You'll become much better at expressing your ideas, listening to others, detecting fallacies and issues in their reasoning, reaching agreements, and in general having a much richer and more persuasive discourse.

The skills that we teach and train…

You will notice improvements in the way you interact with people in all spheres of your life, and more importantly - you'll start getting results. What is more - those results will come rather quickly. If you invest at least enough time to attend and participate in club meetings twice a month, you'll be surprised how much you have improved in merely 3-4 months.

Why is this important?

The soft skills that we help you improve are critical to success in the workplace and life in general, and there's a huge number of research studies backing that claim:

I'm not a leader!

You may think that you're not "born" a leader. That you don't "have what it takes". That you've always been shy and never been able to persuade anything.

Well, you'd be surprised that most leaders were, in fact, just like you.

Leaders are made, not born. And this is not only a hollow wishful thinking idea - there's a growing body of research that leadership is something that can be learned and trained.

Just because leaders are made and not born does not mean that becoming a leader is easy or straight. It takes effort, willpower, and discipline.  You must be willing to invest time in yourself, persistently and relentlessly push the boundaries of your comfort zone, and not give up upon facing the first obstacle.

You don't need to have all the "leadership traits". There are many paths towards leadership.

Do you want to speak like Ronald Reagan or Barack Obama? To lead like Martin Luther King?

If so, we have both good and bad news for you. The bad news is that you can't speak like Ronald Reagan. There was only one Ronald Reagan in history, and you can't be him. Sorry. You can't be Barack Obama, either. Nor any other famous speaker or leader. And that is good because imagine how poor, monochromatic, and boring the world would be if all the public speakers spoke like the Roman orator Marcus Tullius Cicero. Instead of Lincoln, Churchill, Reagan, Obama, Luther King, and so many others, we would have had a hundred copies of Cicero.

The good news is that you can be yourself. There has never been anyone like you in world History, and there will never be one like you again. You can develop your own public speaking and leadership style, with your own personality, with your own charisma. And that's what will make you unique.

In Agora, we place special emphasis on you finding and developing your own style rather than trying to imitate someone else. You will be studying many great people's speaking and leadership styles, picking up ideas and approaches that you like. You will be studying the core tools of rhetoric, argumentation, management, persuasion. And with all these pieces, you will build your own unique style.

I can't make a difference!

The world is in such a bad shape that you probably think that you can't really make a difference. The problems are huge and seem insurmountable.  There's oppression, violence, climate change,  poverty,  discrimination, war. How could anyone make a difference, especially when they don't have the power, knowledge, influence, or skills?

Yet, you don't need to solve the problems of the world. You only need to solve one small problem for someone to make a difference.

And sometimes, just by starting to actually act about a problem rather than merely talk about it, you'll experience something incredible. 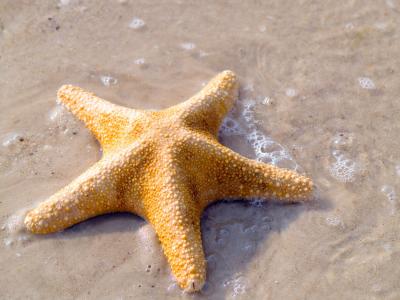 The beaches of Costabel are littered with the debris of life. Shells are cast up in windrows; a hermit crab, fumbling for a new home in the depths, is tossed naked ashore, where the waiting gulls cut him to pieces.

Ahead of me, a gigantic rainbow of incredible perfection had sprung shimmering into existence. Somewhere toward its foot, I discerned a human figure standing, as it seemed to me, within the rainbow, though unconscious of his position. He was gazing fixedly at something in the sand.

Eventually, he stooped and flung the object beyond the breaking surf. I labored toward him over a half-mile of uncertain footing.

By the time I reached him, the rainbow had receded ahead of us, but something of its color still ran hastily in many changing lights across his features. He was starting to kneel again.

In a pool of sand and silt, a starfish had thrust its arms up stiffly and was holding its body away from the stifling mud.

"Yes," he said, and with a quick yet gentle movement, he picked up the star and spun it over my head and far out into the sea. It sank in a burst of spume, and the waters roared once more.

"It may live," he said, "if the offshore pull is strong enough." He spoke gently, and across his bronzed worn face, the light still came and went in subtly altering colors.

"There are not many come this far," I said, groping in a sudden embarrassment for words. "Do you collect?"

"Only like this," he said softly, gesturing amidst the wreckage of the shore. "And only for the living." He stooped again, oblivious of my curiosity, and skipped another star neatly across the water.

"There are so many dying stars on the beach. What difference does saving one star make?"

"For that star, it made a whole world of difference."

I turned as I neared a bend in the coast and saw him toss another star, skimming it skillfully far out over the ravening and tumultuous water. For a moment, in the changing light, the sower appeared magnified, as though casting larger stars upon some greater sea. He had, at any rate, the posture of a god.

On a point of land, as though projecting into a domain beyond us, I found the star thrower. In the sweet rain-swept morning, that great many-hued rainbow still lurked and wavered tentatively beyond him. Silently I sought and picked up a still-living star, whose tube feet ventured timidly among my fingers while, like a true star, it cried soundlessly for life. I saw it with an unaccustomed clarity and cast far out, spinning it far out into the waves. I spoke once briefly. "I understand," I said. "Call me another thrower." Only then I allowed myself to think. He is not alone any longer. After us, there will be others.

It takes courage to take the first star and throw it back into the sea under the onlookers' surprised gaze. It may seem pointless, but you not only have made a huge difference for that star - you've set an example for others. You've overcome the mental blockers telling you that "nothing that you do will matter," and you've changed the indifference into action. Once you've taken the first step, others who have seen your example will join you. They may not join immediately, especially because so many people give up so easily on anything at the first obstacle that we've learned to be cynical.  But if you persist, if you're convinced that what you're doing makes sense, others will invariably join you. The small round ball that you've been pushing will become larger and larger, gathering momentum and support until it becomes an unstoppable wave of change.

And this is not just some random feel-good motivational story. It happens all the time in real life. But you must take the first step, you must believe in what you want to do, and you must persist. 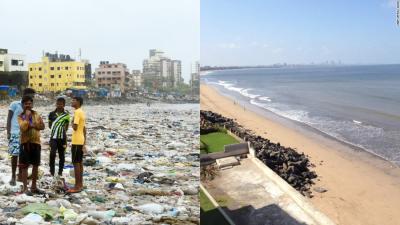 Versova beach transformation - before and after

Versova Beach transformation in Mumbai
(from an original report by CNN)

"I shifted to my new apartment two years back and saw plastic on the beach – it was 5.5 feet high. A man could drown in the plastic," Shah told CNN. "I said I’m going to come on the field and do something. I have to protect my environment, and it requires ground action."

Shah, 33, began cleaning the beach in 2015 with the help of a neighbor. Over time, he was joined by more than 1,000 volunteers, including local Versova residents, slum-dwellers, politicians, Bollywood celebrities, and school children.

The volunteers have also cleaned 52 public toilets at the beach and planted 50 coconut trees. Shah says he wants to plant 5,000 coconut trees there and turn it into a "coconut lagoon like it used to be."

Over a period of 21 months, volunteers led by Afroz Shah collected a staggering 5.3 million kilograms of decomposing trash and plastic from the 2.5 kilometer stretch of beach.

Labeled the "world’s largest beach clean-up project" by the United Nations, Versova's dramatic transformation from filthy to fabulous has gone viral in India, where online commentators have praised the role of local volunteers in helping in the colossal effort.

What is in it for us?

The kind of soft-skills training that Agora provides usually costs thousands and thousands of dollars in professional seminars. We provide it for free using a proven - and enjoyable system.  At this point, you might be thinking - "well, and what do you Agora get out of all this?"  The cynical voice in some people might say, "if you don't pay for a product, then you're the product". There are, however, countless examples where you get excellent products and services for free, created by passionate volunteers that believe in a cause, without your data being sold or scrutinized, or without requiring you to give up anything, in fact. Think about Wikipedia, the Firefox browser, the Linux OS, the Khan Academy lectures, the open courseware of top universities, all the TED and TEDx talks, and so many others...

We get the moral satisfaction of combating the scourge of pseudo-science that has caused so much pain, suffering, and loss to so many people.

We also get the moral satisfaction of contributing to a more peaceful society by creating a global and culturally varied interconnected community where people learn, evolve, and network with each other in friendship and tolerance.

We get the moral satisfaction of contributing to the stability of democratic societies since people who are critical thinkers and detect bad arguments and bad data cannot be easily manipulated into voting populist leaders that will centralize power, strip the state of its checks and balances, and reduce the rights of its citizens under phony pretenses. People who think critically cannot be easily persuaded that another social group, race, religion, or country is the culprit for their problems and will not be easily convinced that violence, aggression, or war is the solution to any problem.

Finally, we get the moral satisfaction of helping our members design and lead actual social projects globally, making it a better place, one small project, and one starfish at a time.  In short, we are happy to see our members transform into leaders that speak up, lead, and make history.